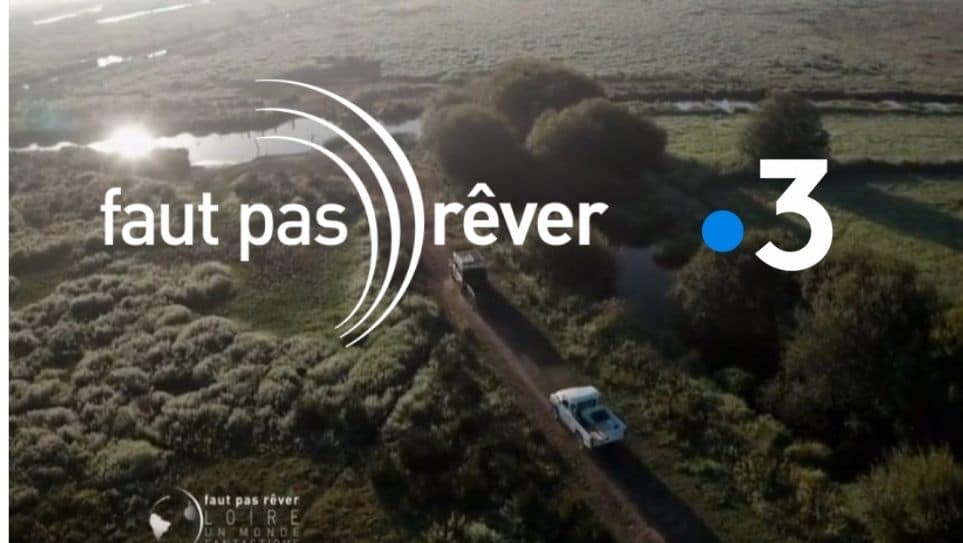 On Wednesday, 3 November 2021, while viewers awaited a report on the Pays de la Loire region, they were greeted by a mechanical elephant with impressive trumpeting. Wow! What a surprise! The gentle narrative that transports us to the Nantes countryside starts with the city’s machines. It introduces us to local treasures the length of the Loire river. One of them is Morta, the precious tree trunk that will become a magnificent gift, Philippe Gougler promises viewers. The programme Faut pas rêver, entre Loire et Morta takes us to the famous knives of Atelier JHP in Brière.

Loïc Peyron, the world famous sailor, is from this region. Let’s just remember his 48 Atlantic crossings, including 17 times solo. As a native of the Loire-Atlantic region, he has been sailing for 61 years between La Baule, Le Pouliguen and on his many voyages. That evening he left his windfoil (or wingfoil) to accompany the journalist from Faut pas Rêver on this happy trip between local treasures, the Atlantic ocean and the Brière countryside.

During the ride on an electric scooter amidst the salt marshes of Guérande, Philippe told him about the famous Morta and the craftsmanship it inspired. He was very happy to receive the Morta knife offered by Philippe, but on one condition. That of giving him a coin in exchange so as not to cut their friendship, a French custom when you are given a knife… Custom or maybe shrewdness because, as Philippe points out, Loïc got a really good deal. He has just acquired a Morta knife from our JHP cutlery (for Jean-Henri Pagnon) in Saint-André-des-Eaux, in the centre of Brière.

Extracting Morta | Not so simple

Exhausting and sometimes discouraging, extraction is hard labour for the team in the early morning. By dint of test probes, sweat and pugnacity, our cutlers search for trunks. Trunks of what ? Of Morta ! Of what ? Of Morta. These trees, originally oak trees, have been waiting in the local peat for 5,000 years. They mineralize, load up with silica to become this black wood of exceptional quality and beauty.

While the Brière horses confirm the day’s find before the TV cameras, it’s a gin that helps lift the trunk. No, we’re not in a bar, we’re in Brière. For novices when it comes to lifting, the gin is an instrument formed from trunks (trunks again?) and a chain that boosts the human strength. The trunk is at a depth of about one metre. And if some of you don’t find that number impressive, it is nonetheless enormous when you have to dig with spades and picks to find the coveted buried treasure. Believe me!

Moreover I remind you, between two difficult gasps, that “one metre, it’s VERY, VERY, VERY, deep. “

Four hours of pain later, the trunk, now in the open air, will undergo the agreed inspection to obtain or not the privilege of becoming a knife handle.

Well done to Alexandre who found the trunk, he earns the right to handle the chain and lift it up.

“It’s truly gratifying to bring it back to life with our knives “, says Alexandre.

Another rest awaits the Morta

I check the density and judge its compactness while confiding that“I still have a sense of naïvety and wonder when I look at this trunk. It has spent 5,000 years underground. It’s an immense privilege to transform it into an object of passion“.

15 trunks a year are necessary to meet our cutlery’s needs. Here’s one already. Before going back to the workshop, we erase the signs of our passage to leave Brière intact. What’s one more thrust of the spade, you’ll say.

The Morta will have to spend 3 years drying before it is officially ready to use. Only 20% of the material will be usable.

Jean-Henri, I have lived in Brière for 15 years

I have been working as a cutler for 15 years. After working as a trainer for a subsidiary of a large American group, I came back to Brière with my family. I own my land so I have access to the raw material in the soil. This particularity comes to me and all local inhabitants from François II, Duke of Brittany, who gave his land to his vassals in 1461.

Fascinated by knives since early childhood, I immediately had the idea of associating the two when I discovered the existence of this Brière wood.

In my Morta cellar, I choose a trunk. Then I show the journalist Philippe Gougler and viewers how it is about to turn into stone. Grained, rich, compact and dense are the attributes I use to show the magic of this wood.

What I especially like is the idea of working on a material ” that did not come from unauthorized deforestation, which did not cross the sea on a liner, which came from the entrails of Brière, 500 metres from here. “

It’s decided, the piece of wood will become an XL folding knife and Pierre, our young apprentice receives the cutting instructions.

” I had heard talk of Morta, but never imagined having the chance to work it with my own hands, “ he tells us. Colours and reliefs still fill him with wonder.

Forging | A childish pleasure and a childhood dream

“Nowadays you’re not obliged to forge. If you do it, it’s for the pleasure of forging or to own an object forged by hand“. In front of the Faut pas Rêver camera, I want to remind people of the beauty of arts and crafts and manual work.

Vimala does the guillochage, namely drawing the lines, Pierre outlines, I forge, Aymeric checks and Alexandre displays in the box and ships. What does Rio do? Only observers can answer that question. So here is a wonderful value, that of teamwork. That is why on Fridays we sometimes meet right in the centre of the marshes to coolly decompress with some sausage, bread and the knife of course. So ends the France 3 report like any meeting between friends. But the story does not end there. While the report finds its place among the other programmes already filmed on site, the adventure continues in the Morta Knives shop.

Want more information? Guess what, we are here for that contact us!

My wife Hélène uses small pieces of Morta to make jewellery when the shape cannot meet our constraints as cutlers. A short visit to the land of Morta Jewellery?

Other articles might interest you. Discover life in the workshop.

Our selection of Damascus knives