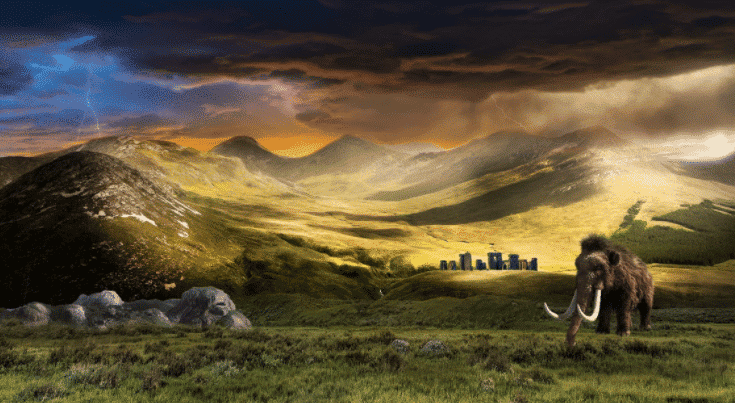 Ice ivory or white gold, mammoth ivory with its pearly white colour abounds in both historical secrets and beauty. The permafrost releases these fossilized pachyderms, which disappeared 10,000 ago, from their sarcophagus of ice. Once uncovered on the earth’s surface, these tusks supply 20th century man with a superb natural material. Already sought after in antiquity when deemed to have superhuman powers, this material still remains very popular in this day and age. Particularly appreciated by Asians, it is used to make piano keys, jewellery, billiard balls or knife handles. Its extraction and exploitation are naturally regulated. But did you know that mammoth ivory contributes to the protection of living species like the African elephant?

The permafrost is the leading supplier of mammoth ivory

The permafrost is a real sarcophagus for fossilized prehistoric animals, little by little revealing its treasures that are 10,000 years old. The term permafrost applies to land that remains frozen for at least two consecutive years, in other words 20% of the planet. This is precisely where the fossilized bodies of now extinct species are to be found. Global warming is melting this thick layer of ice, particularly in the Arctic, in the north of Russia and Canada, thereby revealing the skeletons, bones and tusks of animals frozen for millennia. This new natural resource quadrupled the trade in ivory between 2004 and 2015.

The Russian Republic of Sakha (or Yakutia), a region located south-east of Siberia, apparently contains some 500,000 tons of mammoth tusks, 90% of which are in pristine condition. Almost entirely covered by permafrost, it supplied 70 tons of mammoth ivory in 2017. Not just any mammoth, the Mammuthus Primigenus, which is also found in Alaska, better known as the woolly mammoth. As a definitively extinct species, the trade in its ivory is now completely legal. This is the only proboscidean from which we recover quality ivory, according to the guide identifying ivory and its substitutes. A fully-fledged economy, this fossil material feeds an entire local population, for whom it is virtually the sole resource, according to Valéri Plotnikov, palaeontologist at the Sakha Academy of Sciences. “ There is no work here, no factories, just ice. So why not develop this trade?” he says, nicknaming his region of choice the “mammoth reservoir”.

A fair balance with harvesting regulations

In Sakha, ivory collection is still within reach of anyone holding a permit, which is relatively easy to get. It is on this point that protectors of the environment wish to act. Prospectors of white gold do not hesitate to use water pumps or cut the ice and dig tunnels with water jets to extract the tusks. These methods of operating are causing controversy. Some divers search the rivers, getting there on motorboats, notes the Siberian Times. The most unifying solution seems to be that of having a single certified operator, in charge of collecting, transforming and exporting the mammoth tusks. This solution would preserve the environment.

Mammoth ivory | A weapon against poaching

China legalized the trade in mammoth ivory in December 2017. Why? Because this ivory represents a perfect alternative to that of elephants. By replacing the tusks of the elephant, which is a living animal and a victim of poaching, mammoth ivory aids in the fight to protect elephants. For instance, Beijing prohibits the purchase and sale of ivory, its e-commerce, together with souvenirs from abroad entering the country. According to the NGO Faunawatch, as China is partial to sculptures and other objects in ivory, it was participating in the mistreatment of living pachyderms. The official New China agency is actually delighted by the 80% decrease in ivory seizures and a 65% drop in prices following this decision. Owning ivory shows you belong to a high social class in China.

By meeting the demand for ivory, the tusks of mammoths will contribute to saving the African elephant from poaching. In 2019, Cambridge Core2 asserted that banning the export of mammoth ivory would double the value of that of the elephant and hence increase the number of animals impacted.

Please note that the trade in elephant tusks was already the subject of an international ban since 1989.

Mammoth or elephant | Question of vivianite

How to differentiate mammoth ivory from that of the elephant? Only the former contains vivianite. This iron phosphate mineral gives mammoth ivory slight brown or blue-green inclusions. However, be careful before categorizing a piece considered too uniform! Figurines, chess pieces or other perfectly white sculpted objects can also be made of synthetic materials. To know more about identifying ivory, registers like that of CITES contain all the information.

At Morta Knives, we do not want to encourage the use of this material on a large scale. We simply want to recall the millenial and sovereign nature of ancestral materials. That’s why knives in mammoth ivory do not exist as such in our catalogue. Here only our local wood, Morta, is allowed to accompany our blades. As the wood is five thousand years old, it combines perfectly with the ivory. So we just propose three little inlays on each side of the knife’s handle to embellish it. Likewise, as an option too, a thread of vulcanized fibre adds a slight blue note.

The marriage of white and black gold

Here we go! Like the mammoth that returns to the living world, its white gold meets its match in the person of Morta. A magnificent alliance of materials for a fantastic pair that will make people happy. White and black, Ying and Yang, perfect absolute balance. Okay, we’re off subject perhaps😉… but beyond their natural beauty, these two precious materials bring us a new social dimension. Which one? Ah! Suspense! Discover shortly a great way to end parties with Morta Knives.

Find the mammoth ivory inlaid on our fixed knives, kitchen and table knives and our folding knives.

The love of natural materials brings together fans of the beautiful and true. That notwithstanding, taking good care of our planet’s resources remains a non-negotiable requirement. Mammoth ivory, like Morta, turns out to be a treasure that deserves to find a place on valuables. That’s what we offer on Morta Knives. Want to know more? In search of a gift idea? Contact us !